NEWS
<< Back to Press Releases

On August 12, 2022, NPWA welcomed Ava Kloufetos to their Operations Center to paint a fire hydrant, for which she submitted her winning design to their hydrant design contest held in May for Drinking Water Week.

Ava painted the hydrant in her winning smoke and fire design, as her family and several NPWA staff looked on. The hydrant will proudly be on display in front of NPWA’s Operations Center, located at 300 Forty Foot Road in Towamencin. A sign with her name will also accompany the hydrant, which will remain there until a new winner is announced during next year’s contest. 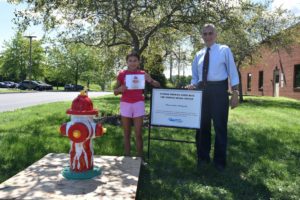 This year’s contest was held during the first week of May in honor of National Drinking Water Week, for students in grades Kindergarten through fifth to design a fire hydrant. Ava, a third-grader at the time of the contest, submitted her design, which was among over 70 entries received. NPWA staff voted her design the winner on Friday, May 6.

“Ava’s design captured the true essence and purpose of a fire hydrant,” said Anthony Bellitto, Jr., executive director of NPWA. “We thank all of the kids who designed and submitted a fire hydrant for our Drinking Water Week contest; we look forward to seeing the creative designs each year. Drinking water plays a vital role in our everyday lives, which is why we wanted to draw attention to Drinking Water Week through this simple, at-home activity for kids.”

National Drinking Water Week is an initiative of the American Water Works Association, and occurs during the first full week in May each year to recognize the vital role water plays in our daily lives. For more information, please visit www.awwa.org.